I have one month left at work until I have to go on maternity leave, I say have to because apparently I do not have a choice in the matter. Let me explain – like most of the companies in the fashion industry the company I work for has a shut-down period from 19 December 2014 until about 14 January 2015 in which we all have to take our annual leave that we have built up throughout the year, my plan was to work up until the last day when we would all break up (I would be 38 weeks pregnant). To me this meant more time with my baby after birth. I was however informed that, by law, I have to go on maternity leave at 36 weeks, that’s an entire month before my due date and means that I have only three months maternity leave left after my baby is born.

The maternity leave issue has been bugging me for a while now. According to the Basic Employment Act, mothers are entitled to four consecutive months of maternity leave – first off, even if your maternity leave only kicks in after the birth of your baby, four months is not nearly enough time to bond with a newborn (you can read my article on bonding with my first child here). Secondly, I am one of the many unlucky women who will not be receiving a salary from my company during this time. Luckily our baby was planned and we have been fortunate enough to make provisions, but it is still going to be a major financial setback for us. Many women cannot afford to not receive a salary for that amount of time and are thus forced to go back to work earlier. You can claim from UIF, but the amount you receive is nothing short of a joke… at least it is better than nothing I suppose. I have asked the opinions of a couple of South Africans through various social media network platforms as well as forums – most of the feedback is pretty much on par with how I feel, but some of the comments just blew my f*#@! mind.

According to Economist Dawie Roodt – longer maternity leave is not an option for South Africa. “The current duration is far too much already. When the politicians start to force the employer to keep a position open for a longer period for an employee, they are essentially penalizing and taxing the employer,” –  I wonder if Mr Roodt has children, or how long his wife took maternity leave (if she works at all). He then went on to make the following statement – “When UIF is being paid out for a longer period, it means someone else is paying for you to be on maternity leave.” Okay, I understand, but I am paying for some asshole in Pollsmoore Prison to receive a meal and a bed every night for killing/raping/murdering/stealing or whatever. I am also paying for my president to build lavish homes (Nklandla) and for his wives to go on insane designer shopping sprees. I am paying towards a government that is crumbling and that has become a source of comic relief to us. Surely, paying me UIF is a small price to pay compared to all the money we fork out that seems to disappear into thin air.

A senior policy consultant at the South African Chamber of Commerce and Industry, Pietman Roos, said if maternity leave was extended, employing women would be seen as a risk to companies. “It’s a cost factor. It would ultimately affect the chances of getting a job for all women,” he said. I’m sorry, does that not constitute as discrimination?? Why are we being punished for having babies?

Many women referred to the Pick n Pay model which allows eleven months of maternity leave, nine of which are paid. The retailer gives fathers eight days’ paternity leave, even though labour legislation does not make specific allowance for leave for new fathers. If the mother and father both work at Pick n Pay, they can share the maternity leave. That is amazing – why did I not go work for them?? Makro is not far behind, offering employers nine months paid maternity leave.

South Africa abides by the ILO Convention 183, which states that a woman is entitled to maternity leave of no less than 14 weeks, but the country has not taken up a recommendation to extend maternity leave to at least 18 weeks.

Sweden is the most generous when it comes to parental leave – mothers and fathers can share 16 months at home with their baby.

At least we are not in Tunisia, which offers the shortest maternity leave of just one month.

Four months is not nearly enough time with your new baby, and it is definitely not enough time for your body to heal. It took about 2-years for my body to get back to normal after I had our daughter – I am not at all saying we need two years maternity leave, but you can imagine how much strain it will put on your body going back to work after just three/four months. Most moms suggested that six months would be sufficient time for them while others brought up the models of Canada and Sweden which allows parents to take up to a year maternity leave to be split between parents as they see fit. You also get those superhuman beings like Marissa Mayer, CEO of Yahoo who went back to work only two weeks after giving birth to her first child, but I am not going to give my personal opinion on that one. I feel like after four months you are just getting used to being a mom, and then you have to leave your baby and go to work… it is quite cruel. Needless to say, this becomes more tricky if you have a premature baby or if your baby is seriously ill. 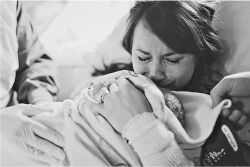 Our country goes above and beyond to promote breastfeeding for as long as possible and mothers are shamed and looked down upon for turning to formula, but in all honesty – do we have a choice? I have never worked for or even heard of a company in South Africa where there were any breastfeeding or pumping facilities, never mind breats milk storage facilities. I remember when I had Mikayla my only choice was to sit in a unisex bathroom and pump, which for hygienic reasons weren’t feasible – I could also just imagine how people would freak out if I stored my breast milk next to their lunch in the fridge. Some moms are comfortable sitting in a boardroom or a breakroom pumping, I am not – the thought that someone can walk through the door at any second stresses me out. Stress and breast milk supply do not go well together. Some mothers master the art of pumping and can exclusively pump for their babies outside of working hours, unfortunately my milk supply has never been enough to do that and I had to switch to formula soon after I returned to work to meet my baby’s demands (believe me, I tried every tonic and milk supply booster you can imagine). I am trying to remain positive, but that will probably be the case with little Knox as well. I do not feel like I have a choice. 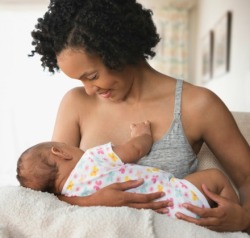 I have yet to find a daycare that I would or could leave my son at 3 months old… Most daycares only take babies from six month onwards. I am lucky enough to have my mother-in-law around, but not everyone has that luxury. How can you return to work and not be comfortable about leaving your baby somewhere… how can you concentrate at work or give 100% when your mind is occupied by the most important thing in your life being in the care of someone you do not know? It’s heartbreaking to leave your three-month-old baby at a crèche. I believe companies should strive to create daycare facilities at work.

I am not an unreasonable person, I completely understand that many small companies cannot afford to pay their employees four-six months maternity leave, but I do not work for a small company and I am still not getting a cent. Many moms rush back to work before four months of leave because they are unable to sustain their families on their benefits.… there is no way that I could live off the money that UIF is willing to pay out to me. I feel that we pay so much towards tax, PAYE, UIF and whatever other nonsense… so much towards a system that is completely and utterly flawed. The UIF payout should be more, shouldn’t it? Also, there should be some sort of a system where bigger companies are judged on and should legally be paying you a percentage of your salary? What do you think? They should at least cover a portion of your maternity leave, whether it is a month or two paid or whether it is a percentage every month. Once again, are we being punished for having babies? 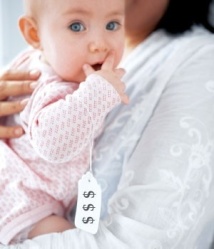 In South Africa we do not have Paternity leave per say, we have what they call Family Responsibility Leave which entitles a father to three days off work…. Three days. My husband has decided to take one week and see how it goes from there. He is self employed and has this luxury but, he said he does not know how he would handle not being able to spend some time with his new born child, three days is just pathetic. It is just as important for a father to bond with his child, also, in the event of a cesarean who is going to help mom at home?

Issue #6: People Who Can’t or Won’t Have Kids and Their Senseless Arguments

I had a couple of responses from men and women who do not wish to or cannot have children, who state that four months maternity leave is “way too much” and unfair towards them as they should also be offered four months leave of some sorts. To these men and women, it is extremely obvious that you do not have children or can’t even comprehend what it is like – maternity leave is not a holiday. First and foremost, you are recovering from a medical condition. Secondly, you do not get to sleep in, relax or have loads of time for yourself… there will be days where your husband comes home to find you on the couch with your baby in your arms, covered in baby vomit, breast milk and drool – sobbing because you have not had the time to change out of your pajamas or have a shower in the past couple of days. Thirdly, maternity leave is a time to invest in your family’s future.

Know Your Rights – Maternity Leave and the Law:

What is your opinion on maternity leave in South Africa? How would you like to improve it?

45 thoughts on “My Issues with Maternity Leave in South Africa”